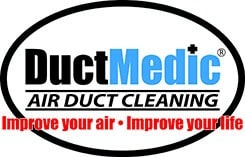 Q: I’ve already had my air ducts tested and sealed by an Energy Auditor why would I need to do it again?

Regarding testing of duct leakage, there are a number of different types of tests to measure the leakage. Depending on the type of test done on your ducts, they may or may not have a gotten an accurate reading. I know that when I had my audit done, they told me they were pretty good, but when we did my system over the summer with the Aeroseal, they were actually quite leaky – about 20% on the supply side and about 15% on the return side for a total of about a 115 square inch hole! Not so good! Now that we’re sealed, I feel air moving out of ducts that never had much air coming from them.”

Q: What size of holes can be sealed using the Aeroseal air duct sealing process?

A: Holes and cracks up to 5/8th of an inch wide can be completely sealed.

Q: What does the Air Duct Diagnostic and Inspection tell me?

A: Inspection discovers any obvious break in the duct work and, as the initial step of the sealing process, the Aeroseal system will establish an exact amount of leakage in the duct system. Of course, many people already know that a room or two in their house doesn’t get good air circulation because they can feel it. Or, they already know that their energy bill is high because they see it. The diagnostic measurement, provides a scientifically valid means to understand the performance of your air duct system. Many people are surprised to learn that homes typically leak 30% to 40% or more of their air through air duct leaks.

Q: What are the estimated savings?

A: A series of government reports have shown that air duct sealing can lead to up to $850 in energy savings per year. Some homeowners have saved up to 40% on their energy bill. Naturally, exact savings are difficult to precisely estimate since they depend on a multitude of variables such as your weather, house condition and design, your heating and air conditioning system, system usage — as well as other factors like energy prices.

Also, as Aeroseal air duct certified technicians, DuctMedic is qualified to run a program made by the Environmental Protection Agency (EPA) called “Duct Investor”. Duct Investor takes a comprehensive list of variables and provides a homeowner with the best available estimate of what they should realize in cost savings

Q: In a nutshell, how does an Aeroseal air duct seal work?

Q: How long will the air duct sealing material last?

A: The sealing material has been found in rigorous testing to last over 10 years without failure.

Q: Do air ducts need to be cleaned before air duct sealing?

A: It’s likely that the holes and cracks in the ductwork have allowed dust and other particulate matter to enter the system. If you are experiencing extensive levels of household dust, this might be the reason. In most instances, duct cleaning is not found to be required prior to Aeroseal sealing. DucMint can advise whether it will be necessary to clean your ductwork prior to sealing.

Q: Does the sealant coat the inside of the ductwork?

A: The sealant only sticks to the holes in the air duct without coating the rest of the duct.

A: The sealant material consists of a water-based solution (65% water) prior to application. The dried sealant material primarily contains two chemicals, vinyl acetate polymer (VAP) and 2-ethyl-1 hexanol (2E1H). The vast majority of what is left in the duct system is VAP, which has been used in water-based paints, adhesives, and hair spray. VAP has been used in chewing gum, and has no OSHA Exposure Limit. 2E1H is a common industrial solvent and is not considered toxic by OSHA. A review of the literature showed no ill effects after long-term exposure to concentrations of 200 ppm. The largest concentration of 2E1H measured in test houses was 1 ppb (200,000 times smaller), during Aeroseal injection. The sealant is UL-listed for smoke generation and flame spread (UL 723 0,0), and additional testing by UL showed no signs of mold growth or erosion.

Q: Does the sealant leave an odor?

A: The Aeroseal air duct sealing process leaves no lingering odor, and since the material does not put off gas over time, there will be no odor for the life of the product.

Q: If the rooms of my home have inconsistent temperatures, can Aeroseal improve the performance of my heating and A/C system(s)?

A: The Aeroseal sealing system can help improve the comfort of your home by reducing the difference in temperature levels throughout your home.

A: Some homeowners have saved up to 40% of their energy bills after having the Aeroseal air duct sealing system seal their central air duct system. A typical homeowner should expect to see measurable reduction in energy use for Heating and Cooling.

Q: Can the Aeroseal air duct sealing system reduce the noise made by the return and supply grilles in my home?

A: This noise is usually the result of two conditions. One is created when the ductwork is undersized and air is rushing through your air duct system. The other condition is caused when a limited amount of air is allowed to flow through the indoor coil of your heating and cooling system. Once the exact problem has been identified, at DuctMedic we can provide the best solution for noise reduction.

Q: Can the Aeroseal air duct sealing system reduce the amount of dust in my home?

A: Ductwork runs through attics, crawlspaces, basements, garages, and walls. Leaking return air ducts pull in dust and other indoor air pollutants and sends them to the central heating and cooling system. From there they sent to the living areas of your home. The Aeroseal air duct sealing system can reduce the amount of leakage by as much as 90%, reducing dust and other indoor air pollutants from the conditioned air in your home.

Q: Is the sealing guaranteed or can I get my money back? What if it doesn’t work?

A: Aeroseal provides a 10-year warranty on the seals created with our process. We have enormous confidence in the quality of our seals since they are based on Lawrence Berkeley National Laboratory research and a patent through the University of California. The EPA has endorsed Aeroseal, as have numerous local energy utilities. Note: the warranty is for on-site seal failures and does not cover additional damage (e.g. an electrician that steps on a duct while running wiring), wear or tear (i.e. the shelf life of a plastic duct is passed, rodents eat into a duct, or a duct rusts out), and subsequent replacement of failed ducting. Overall, in the 75000 plus seals done to date, we have received negligible number of warranty claims.